This week in EDTC 400, we had our 8th debate. This week’s debate topic was “We have become too dependent on technology and we’d be better off returning to the “good old days” before the Internet and smartphones took over”. We had to either agree or disagree with this statement. Jayden was the debater on the agree side of the debate and Kiera was on the debater on the disagree side of the debate. This week’s debate was a bit different from most because this debate topic really connected many of the previous debate topics.

Similar to the previous debates, the class voted on the debate prior to hearing the arguments from the debaters. Most of the class (about 77%) disagreed with this statement while some (23%) agree with the statement. This week I was on the majority side to begin. Prior to listening to the debate, I was on the disagree side. I did not think people would be better off without technology. 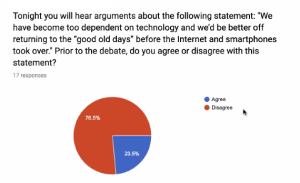 Jayden’s Side Of the DEbate

To start off the debate, the class watched Jayden’s video that argued that people HAVE become too dependent on technology and that we WOULD be better off returning to the ‘good old days’ before the internet and smartphones took over people’s lives. Jayden was very persuasive in her video and made four major points in her video. Jayden’s four major points that argued for the debate topic were:

Some of the points Jayden made were arguments that I have already previously heard that argue against technology, but some of her points really stuck with me. Most people my age have heard from someone older than us that technology is ruining our lives. I have been told many times that my generation does not know how to go outside or have face-to-face conversations, but I do not think this is true. I know many people that love going outside and spending time away from technology. Even though this is not true for all people, there are some pitfalls to having technology. 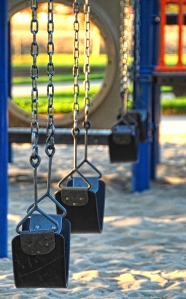 Being on technology, such as smart phones or laptops, can really hinder the relationships people have with each other. I know that I always get frustrated when I am out with my friends or significant other and I am trying to have a face-to-face conversation with them and they are more focused on whatever is on their phone. I know this makes me feel that I am not worthy of a person’s time and I do not feel valued by a person when they would rather spend time on their phone than spend time with me.

Kiera’s Side Of the Debate

After the class watched Jayden’s video, the class watched Kiera’s video that argued that people HAVE NOT become too dependent on technology and that we WOULD NOT be better off returning to the ‘good old days’ before the internet and smartphones took over people’s lives. Kiera was also very persuasive in her video. Kiera’s video had four main points that argued there are many benefits to technology. Kiera’s four main points were:

Kiera’s video raised some points that I have already previously heard about why technology is good. Technology makes many things more efficient in life, such as finding directions and communicating quickly with others. Technology enables people to communicate with friends and family that do not live in the same city or region as them. Technology keeps me and many of my friends in contact with each other. I can easily send a text, or a snap on Snapchat to get into contact with my friends. Technology also enables people to have more opportunities. For example, people are able to take university courses online when they cannot get to the on campus classes.

One of the biggest things that stuck out to me from Kiera’s side of the debate was that technology was her discussion about how technology can connect people. Technology can connect people from all over the world. Technology can also enable people to communicate things that they are unable to communicate face to face. For example, as Nancy Lublin shares in her Ted Talk that Kiera shared, children are sending text messages to the company she worked at as a way to reach out to get help. Many students and young people feel more comfortable sending a text message to explain their feelings. Nancy Lublin sees the potential that technology can have on helping people reach out and get help. Texting is discrete and takes one to two minutes to send a message which makes it very appealing to young people.

One of the biggest discussions that the class had was on our reliance on GPS. Many people my age, myself included rely heavily on GPS to navigate our ways through cities and highways. While GPS is a really handy tool to have in your literal pocket, it does not always work exactly the way it should. As mentioned in Brad Plumer’s article that Jayden shared, GPS relies on satellite signals to navigate and determine where a person is in the world. Sometimes satellite signals are not reliable or they are interrupted due to a number of reasons. Our class discussed some of the issues with GPS navigation or Google Maps. Most of the GPS systems require data to run when a person is not in Wi-Fi signal. The class also discussed the issue of GPS system sending them on crazy dirt roads or to the wrong place. I know that I have used Google Maps on many road trips and I know first-hand that sometimes the ‘fastest route’ that Google Maps wants me to take is a summer road that cannot be driven on during the winter, or it is a longer route from the main highway. GPS systems can be very helpful to people, but people must still have a general idea of where they are going in case their GPS system does not work.

Along with discussing the struggles of GPS systems, the class also discussed some of the benefits of technology. There are many benefits of technology, including access to research material. I know that most of the time when I am researching a topic, I will first look online to see if there are online articles and then I will look to see if there are any books online. Technology can benefit students in many ways,. Students have access to resources that are not available through printed text. Students also have access to online content that cannot be created through books or other technology free resources. For example, students with online access have access to educational games, videos, and apps that cannot be created without technology.

In the end, the final poll for the debate did not change much after the debate. About 65% of the class disagreed with the debate topic and 35% agreed. Below is a picture of the final debate poll. 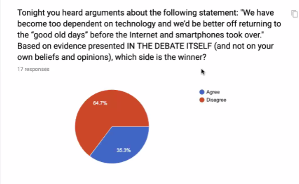 Overall, this week’s debate topic really tied in many of the other debate topics. Technology has many benefits, but it also has drawbacks. Technology can offer people many opportunities and provides many benefits to everyday life. Technology enables me to stay in contact with many of my friends that do not live in the same city as I do, and also my friends that live close to me. Technology also enables me to be successful in school in many ways, including research topics for school, have access to homework assignments, have access to online textbooks, writing essays, and even participating in an online class (such as EDTC 400). Technology gives me many benefits but I know that technology must be used in moderation. 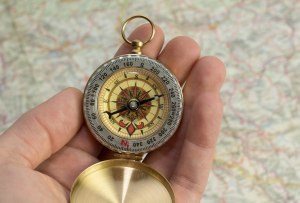 Even though technology has many benefits for me, I know that there are some drawbacks to using technology. Technology can be very distracting and addicting. I know that I can sit on my phone for longer than necessary and have a hard time ignoring my phone when I need to get work done. Along with being distracting, technology can also cause people to lose skills that previous generations had that did not have technology. Many people do not know how to read a map, use polar navigation (i.e. North, South, East, and West), remember phone numbers, or cursive writing. The article by Tammy Robinson that Jayden shared lists many things that were once common-known skills that are no longer common among people due to the increase in technology. I personally don’t know how to navigate using the North, South, East and West directions, but I do know how to use a map and write in cursive handwriting. Even though many things are not as common due to the rise in technology, people can still learn the skills that were part of the “good old days” if a person wants to.

What are your thoughts on technology? Leave a comment below!

3 thoughts on “Should We Return to the “Good Old Days”?” 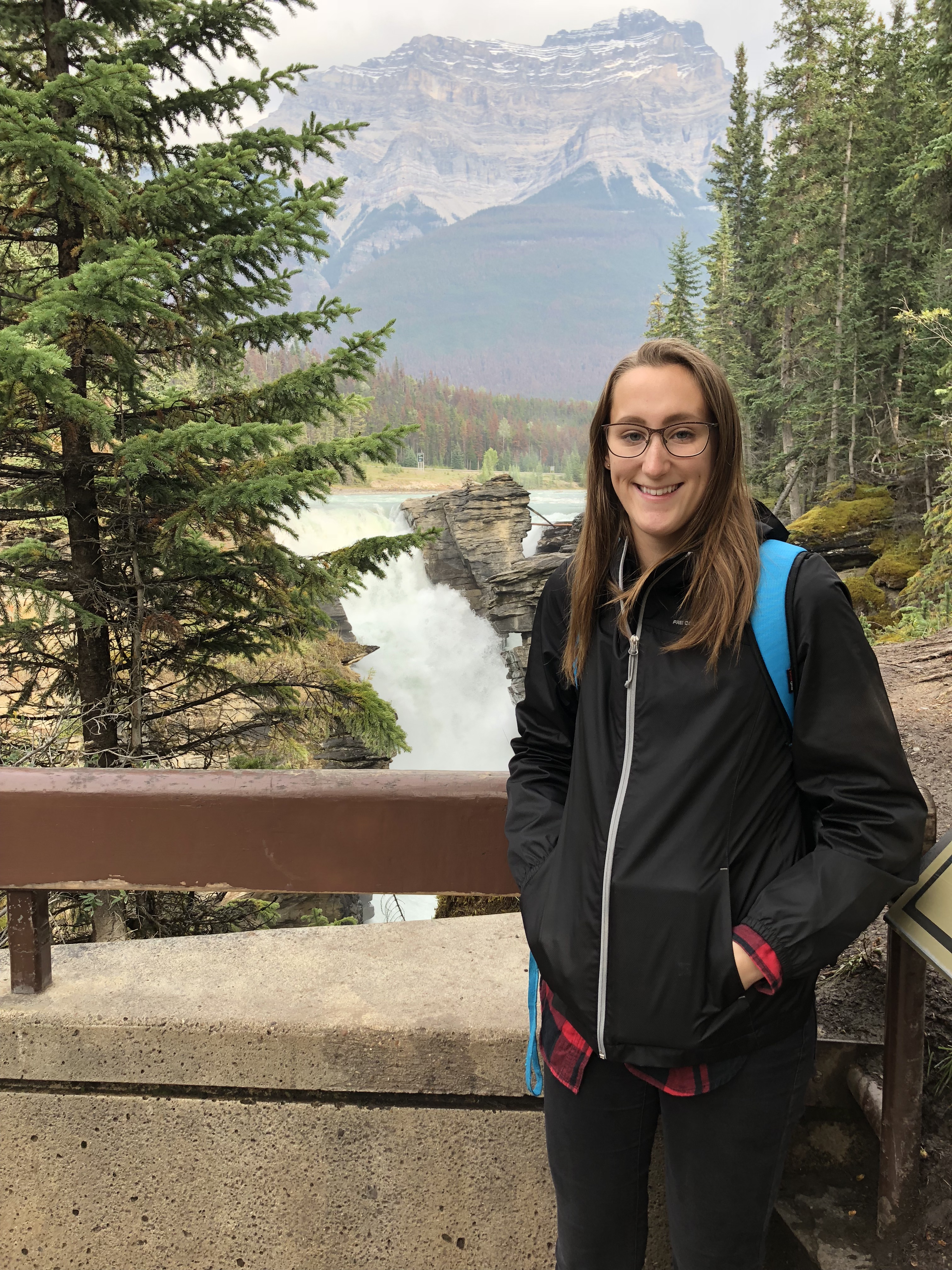